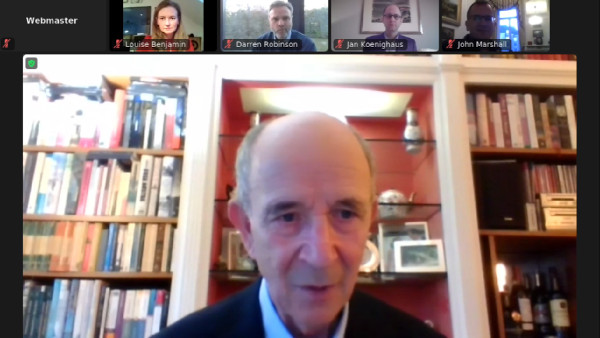 The Annual General Meeting of the Society was held on-line on 7th March in a break from the traditional social gathering.

Our former President, David Clark, stepped down from the Council but was shortly after the AGM appointed as the first Honorary Member of the Society. David’s passion has been integral to all the advances which the Society has  made in recent times and leaves the Society in a strong position at a crucial moment in history. The Council will invite David to a private thank you party when the sanitary crisis allows.

Dr Claudine Als also stepped down after several years of service to the Society. Claudine’s wisdom and advice and cultural knowledge will be sincerely missed by the Council but we will remain in close contact.

Patrick Santer also leaves our Council and takes up a new role as Patron of the Society. We are grateful and honoured to have Patrick in his new role.

The new Council members can be seen on our ABOUT US page.

HE the Ambassador kindly spoke to the Members of the Society for the last time before his upcoming departure. The Society is ever grateful for his support.